This post is all about making the most of your waiting season!
In this post, we’re going to show you 3 proven steps to assure that you’re waiting season is not wasted.. This is such an important topic to discuss because almost every single woman has either gone through, is going through, or will go through a season of waiting in her life.

Whether you’re waiting on a new job, waiting on the right man to come into your life, or maybe even waiting to get pregnant… We know that God has purpose for you in the pain or loneliness you may be experiencing.

Personally, this is a very special topic to me because I’ve been through several tough waiting seasons in my life… But I look back now and see the ways God was using those waiting seasons to prepare me for the incredible blessings to come!

For example, I was single for years before meeting my *amazing* husband… and that was such a lonely time for me. But, looking back, had I not had that time of waiting, my husband and I would not have been the people we needed to be for each other when we met!

That’s just one example, but if you want more.. you can listen to our waiting season Podcast episode below. 🙂

This post is going to show you the best ways to navigate a season of waiting for love, a job, or anything else. 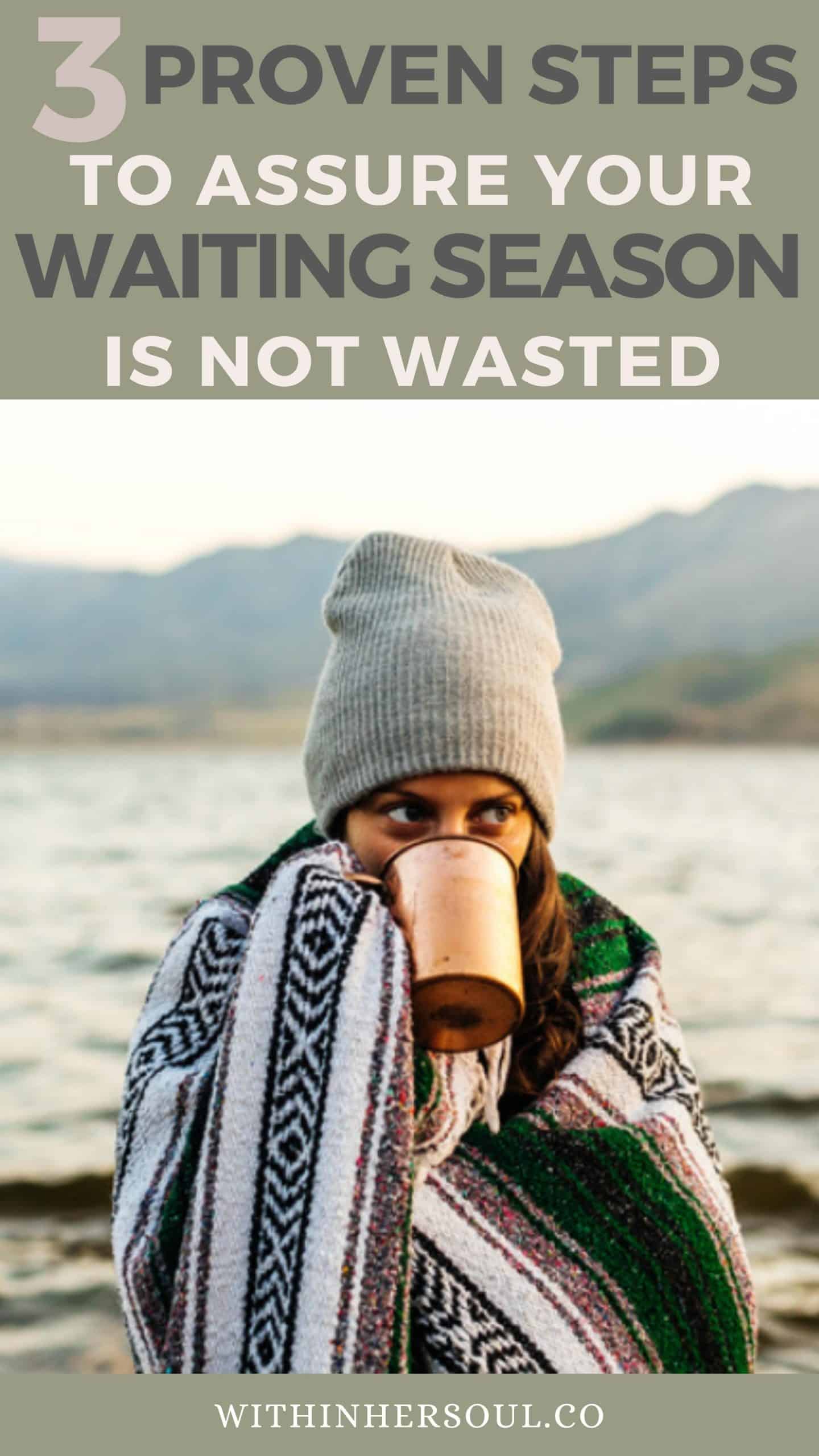 What is a Waiting Season?

A waiting season is what many people refer to as a time in life when they’re not receiving something they’ve been earnestly desiring or praying for. Oftentimes this looks like a period of singleness, waiting to get pregnant, waiting on an adoption to go through, waiting on a sickness to leave your body, or waiting on a new career to come into play.

However, anything you’re going through where you feel like “God’s not answering your prayer” could be considered a waiting season.

But He oftentimes answers our prayers in the “background” where we cannot see the work He’s doing!

What is the Purpose of Waiting?

Many times, I believe God’s reason for having us wait is to protect us.

Because, in our human nature… If we knew the answer to our prayer, or what He had planned for us, naturally, we would do something to mess it up.

God is loving and kind and He ALWAYS knows what’s best (even when we cannot see it!) Which makes Him too kind to allow us to sabotage our own blessing.

Side note: If you’ve never heard it, go listen to the song “Haven’t Seen it Yet” by Danny Gokey! He does a beautiful job of explaining waiting seasons in this song.

You may not yet be prepared for the answer to His prayer and what He wants to bless you with!

For example, if you’re praying to become a mother… God may know that there are certain character traits He wants you to hold before you become a mom. That’s why, in this post we’re going to give you 3 steps to making sure you stay in sync with God, so He can make those changes He wants to make… before bringing in your blessing!

Or maybe you’re waiting to meet a godly man to marry… God may have ways He wants to prepare you for marriage before bringing it into fruition!

*Do this: ask yourself “If I were to receive everything I’ve been praying for TODAY, would I be able to handle it?”*

What Does the Bible Say About Waiting Seasons?

Here is an entire list of Bible verses about waiting on God! I know you’ll be as encouraged by them as I have been!

I know that God will use His Words to comfort you and bring you the extra dose of hope you’re needing today. 🙂

Who in the Bible Had to Wait on God?

Oh boy… This could take a while. 😉

Let’s start with Mary. The mother of Jesus! After she was literally told by an angel she would be giving birth to the Savior of the world… she had to wait through her pregnancy on Him to be born.

I mean… can you IMAGINE the suspense, anxiety, nerves, and excitement she must have felt, all in one?!

Talk about a waiting season…

Here are a few others:

Sarah, the wife of Abraham, had to wait on the son God promised her she would have. (You can read about this in Genesis 16 and 17!)

Long story short… God had promised her that she would have a son, but she had grown very old and was still barren. So, she decided to take the reigns of the situation herself and allow her husband to sleep with Hagar, her servant.

Because of this sin, Hagar and Sarah got into fights and no longer had a good relationship. (There is always consequence to our disobedience.)

About 9 months later… Abraham and Hagar had a son, Ishmael. But this son was not the one God had spoken of to Sarah! God wanted Sarah to have a son (Isaac) whom God would establish His covenant through.. a covenant that would bless following generations.

Fast forward some years, and, in God’s mercy… Sarah became pregnant with her own son… Isaac.

God fulfilled His promise! Even though Sarah couldn’t see any possible way for Him to do that during her waiting season. However, if she had chosen to trust God and wait without taking things into her own hands, she could’ve saved herself and others a whole lot of heartache.

Moral of the story: wait on God!

Others in the Bible who had to wait:

How Many Times Does Waiting Appear in the Bible?

The word “wait” is used 89 times in the NIV translation!

So, clearly, it’s a pretty common thing that God expects us to do. 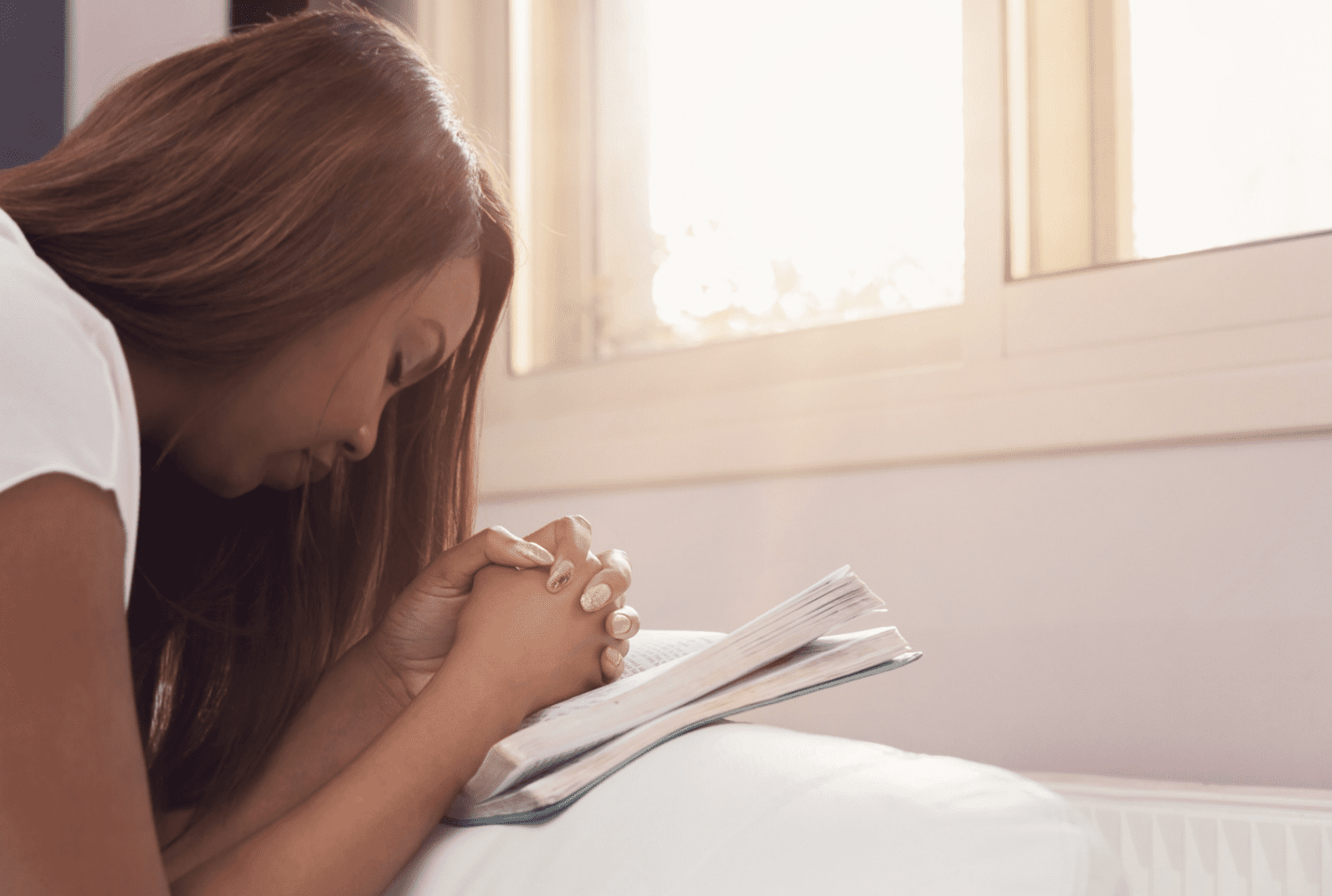 How Do You Get Through a Season of Waiting? (3 Steps!)

As I mentioned above, you truly can grow through, and even enjoy, your waiting season if you lean into the Lord and follow these 3 steps! There IS a reason God is making you wait and you truly have to trust that, even when it’s hard. We must make the CHOICE to trust God, even when our hearts want to shatter.

Here’s how you do that….

All throughout the gospels, we see Jesus retreating to be alone with the Lord. He often went up to the mountains to pray.

“Why did He isolate Himself?” You may wonder.

Well… I think it’s because that’s when He could truly get distraction-free, and focus on the voice of God.

Because, let’s be honest… Hearing God’s voice in the midst of kids running around, jobs being on our minds, and daily to-do lists a mile long, can be quite the challenge.

When we isolate ourselves in the presence of God (which, by the way, can be anywhere)… we can hear Him speak to us most clearly!

“Why is it so important to hear God speak to me?”

Because… if you’re in a waiting season, I can guarantee there’s a reason He’s making you wait! He’s preparing you for something or moving puzzle pieces in the background that you can’t see..

And if you’re not in tune with Him telling you when to move where, you may miss a key part of your story!

Prayer is crucial in life in general, but especially in a waiting season because you truly could miss out on something God has in store for you if you’re not seeking Him…

And not only that, but you don’t want to take steps in the wrong direction. God could be protecting you from something and you need to be aligned with Him in order to receive that protection to its’ fullest.

In the Bible, when God was leading the Israelites out of Egypt (where they were slaves) into their promised land… Their journey should’ve only taken about 1 week to get there….

But guess how long it ended up taking them because they refused to seek and trust in God?!

Their journey went from being a week-long trip to a trip that got passed down to generations after them, all because they wouldn’t do exactly as God wanted.

What does this tell us about our own waiting season?

That the season can be prolonged if we don’t listen to God. And listening to God, requires being in prayer with Him.

The bottom line: If you want your waiting season to be the shortest and least painful route possible, PRAY. PRAY. PRAY. 🙂

Not only did the Israelites mess up by not praying and seeking God like they should (P.S. I am SO often an Israelite and make these mistakes myself, so I’m not pointing any fingers here), but they didn’t obey Him when He did speak to them.

God told them not to store up the manna (the food from Heaven) that He provided for them, and they did it anyway…

And how did that turn out for them?

They wound up with bugs in their manna.

Moral of the story: If you don’t want “bugs” weaving their way into your waiting season, then obey God when you know He’s telling you to do something.

He always knows best and can see things you cannot see. 🙂

I know that if you make the tough choice to isolate, prey, and obey… God WILL bless you! Just like He blessed Sarah, Rebekah, Moses, Noah, and so many others!!

We hope this post all about navigating a waiting season helped you!

Comment below with any thoughts or questions you have! And be sure to connect with us on Instagram. DM us and let us know how we can pray for you during your waiting season! 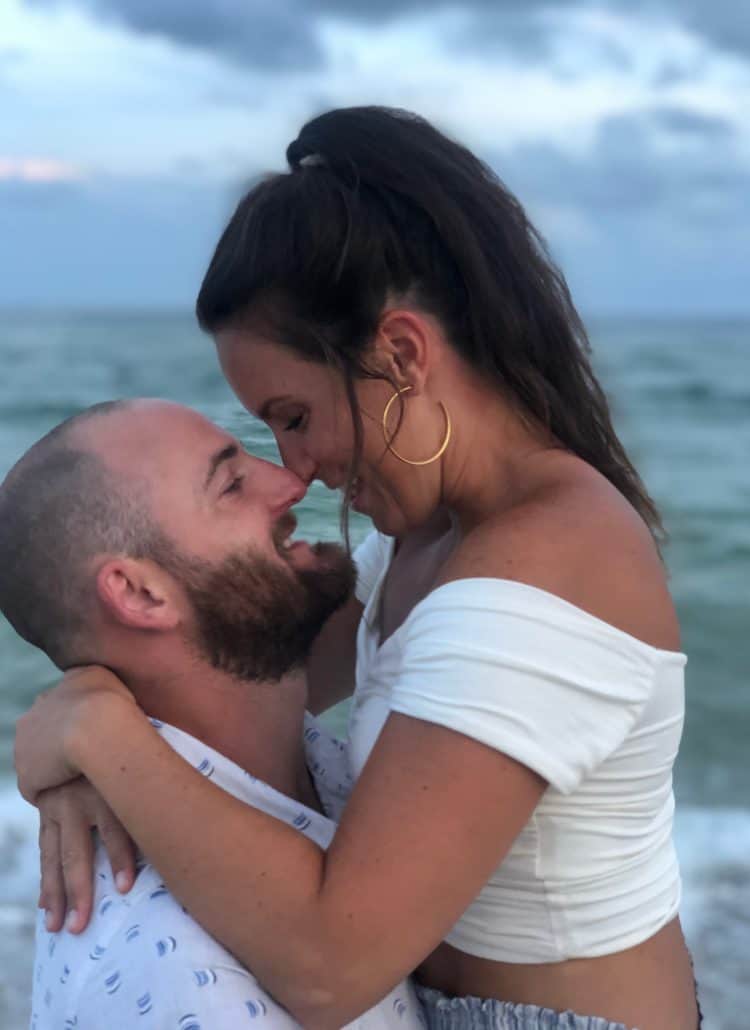 21 Profound Ways to Prepare for Marriage (Not Just the Wedding) 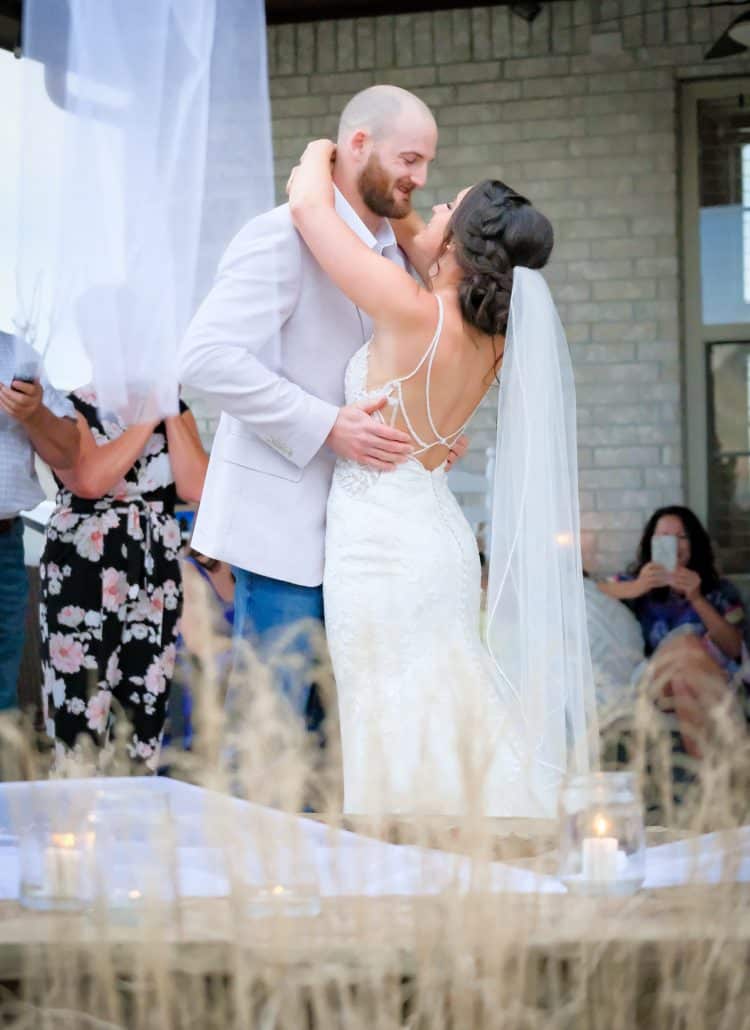 What Does the Bible Say About Being a Wife? (What You’ve Probably Never Learned) This is one of the main tactics Jo and Syd have both used to overcome their own insecurities. 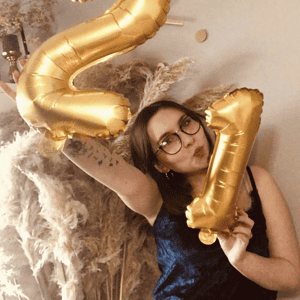 Welcome to Within Her Soul! We're here to help you walk boldly in your God-given identity. get our free weekly devotional! 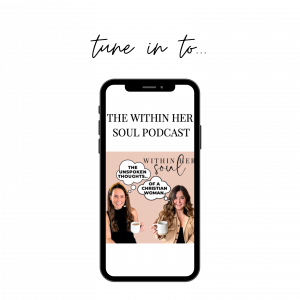 All the Blog Posts

Daily encouragement on the gram!

stay in the know

Copyright © 2022 · Theme by 17th Avenue
We use cookies to ensure that we give you the best experience on our website. If you continue to use this site we will assume that you are happy with it.Ok